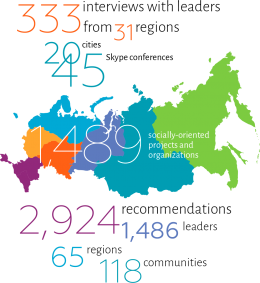 Who are social change leaders and what is SoChain? An answer to this question was provided on November 12, 2018 by Gor Nakhapetyan, Jioulnar Asfari, and Ruben Vardanyan, well-known and experienced social entrepreneurs and philanthropists.

Social entrepreneurs have a special mindset — they see opportunities where others see problems. Social change leaders are those who care and go ahead changing the social environment in a professional manner and carving out niches for the institutions that are yet to appear. But who they are and what are the deliverables of their activities is not universally known here in Russia.

To understand the pragmatic importance of these activities and to make it public, a lot of work was done, and the study rests upon these results.

The map is built on the interviews with 333 leaders solving social issues in Russia. Among them were the participants in the press conference, and the people Russia knows well (Nyuta Federmesser, Chulpan Khamatova, Mitya Aleshkovsky, Natalia Sindeeva, etc.), along with not so well-known, yet no less respected citizens. The above work has resulted in shaping the Map of Social Change Leaders of the Russian Federation (the SoChain Project), a large-scale study conducted in cooperation with the Social Innovation Support Centre SOL’, Friends Foundation, and the SKOLKOVO Moscow School of Management.

The study was conducted using the snowball method and is based on 79 recommendations from the partner team. In turn, these 79 people, in their in-depth interviews, recommended new social change leaders, many of whom were later interviewed and helped to involve other strong candidates.

* 333 interviews with leaders from 31 regions

Video of the press conference is available  here

The maps formed by SOL’

«Mapping can be a good joint infrastructural step that would be of use not only to the leaders’ community, since it mirrors the current state of the community, but also to ourselves — for more effective work, and to all those who consciously embark on the Path of Charity.».

«When we tried to understand what was happening with the charity industry in our country, we found there were lots of different figures and data and a clear lack of extensive in-depth research that would allow us to build our own strategy, as well as to efficiently and effectively transform the space we work in. Studying charity sector leaders will help us to understand who these people are, who is changing and promoting the sector today, and who we can rely upon to establish strong partnerships. ».

«It is no secret that the quality of human capital and the quality of institutions are the main drivers of development. Any truly sustainable change is created by talented professionals who have the skills and competencies of the 21st century. And these are not only and not so much hard skills as soft skills. Therefore, it was important for us to support this study to understand the key characteristics of such change leaders in Russia.

Charity is not just about emotions. Charity is about stable professional, systematic, results-driven tools and facilities.

The global demand for social entrepreneurship is growing at a tremendous pace now. We all need projects blazing a trail for long-term development, shaping the environment, and involving public at large. This is the only way to really change the world. ».

Participants in the press conference::

Gor Nakhapetyan, entrepreneur and philanthropist, Honorary Professor of Business Practice and Honorary Member of the Association for the Promotion of Development, SKOLKOVO Moscow School of Management, co-founder and board member of the Friends Foundation.